Just added to your cart

Qty:
View cart ()
Black Lives Matter
Where's Gene BTW
Only you can stop gender reveals
We are all love who you are
Trans Rights Are Human Rights
Tlopps Tlopps Tlopps Tlopps
Pudge Nakamoto did what
Booty shorts... for me?

The Garages : The Blaseball Cares Interview

A cacophony of voices echoing all through the Blaseball stadium, the sound of screaming fans.  The whizzing sound of mach-speed blaseballs, cracking against metal and wood.  The ever present noise of the feedback, the crunch of a peanut. The most iconic sound in Blaseball, though, is none of these things: it’s the blare of the Garages riffing on an electric guitar.

The Seattle Garages fanbase have been releasing excellent albums, almost since the start of the Internet Blaseball League.  Featuring a wide range of genres and sounds, The Garages are known for their powerful vocals, phenomenal messaging, and devotion to the band. They serve as inspiration for every creator in the Blaseball fandom.

We sat down with rain and Melissa (MucusQueen) to talk about the Garages sound, their place in the community, their next EPs, and how creating in the wake of Blaseball has inspired a community.

Hey! Great to have you both here with me. I’m a huge fan of the Garages, so this is incredibly exciting for me. Let’s get right into it and talk about your latest releases.

rain: So the last one was caught in the reverb, with the next one being encore, which is the Jaylen-focused record we're doing this week.  So the last one was leading up to that, some pre-Jaylen topics, and then this week, it'll be a real deep dive into the Hotdogfingers saga. 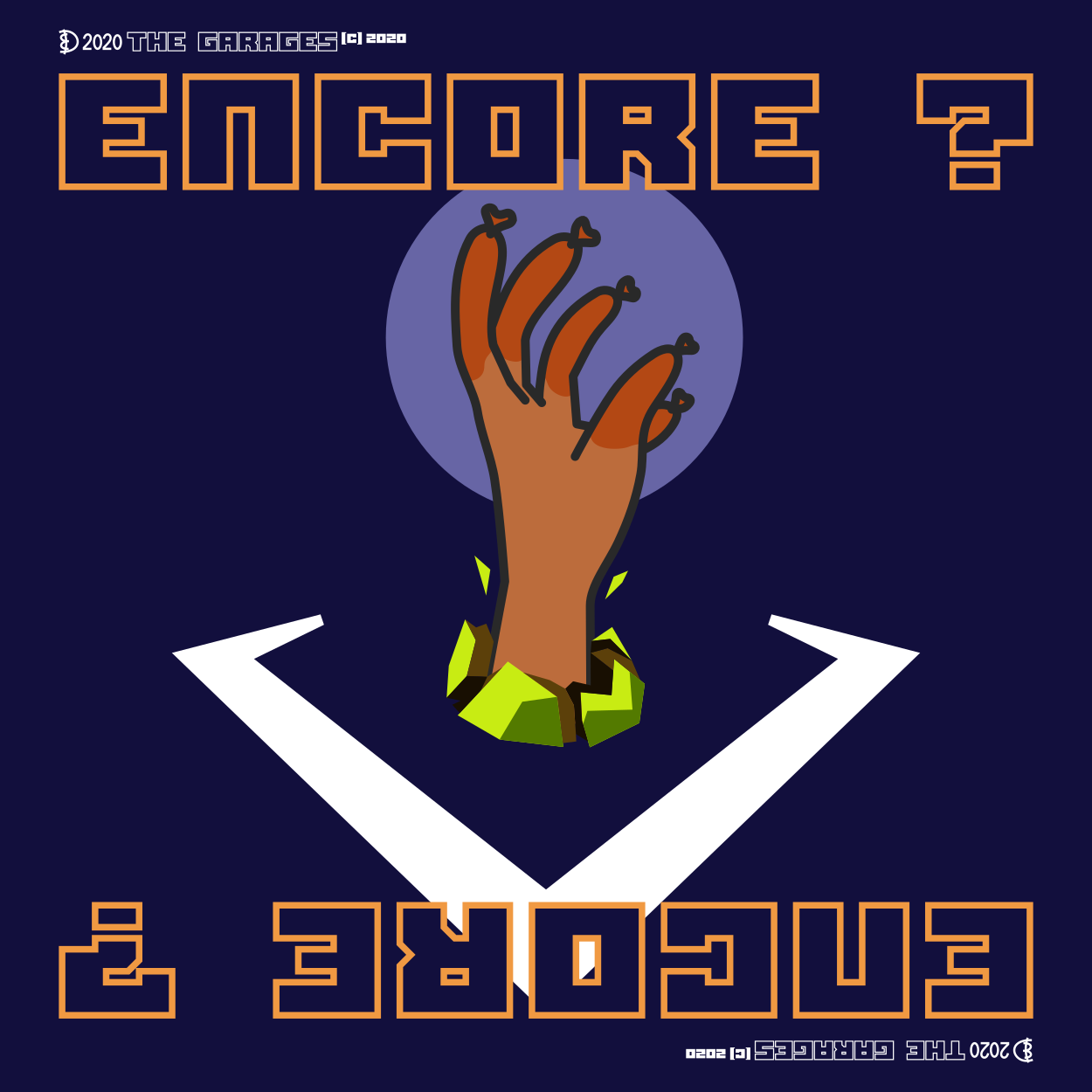 Album art for Encore? and Caught in the Reverb The Garages. Art by Deric Bindel

That sounds awesome!  What's Caught in the Reverb about?  Probably what it sounds like on the tin?

rain: Yeah!  We do two kinds of releases, some that have a specific theme, then some that are more loose and about whatever; Caught in the Reverb is the latter type. By the nature of when people were writing tracks, we've got tracks about hypothesizing what happens when you resurrect someone, and some general anti-god sentiments.

Do you think a lot of that has been inspired by recent seasons, or was it always a flavor of the band?

rain: We're very reactive, I think.  It's very much about what's happening in the current season, or the season that's just passed, but there's definitely some underlying themes. The first release we did with a really specific topic was the garages kill the gods, and it seems wild to, like, reminisce about it, because that was a month ago.

But weeks are so huge in terms of events in Blaseball, so there's a lot to talk about, and if we aren't turning tracks around in a week, then the lore of Blaseball has run away from under us.


Absolutely, and it feels like time is passing at an accelerated rate when you're in this kind of sphere [around Blaseball].

rain: Yeah, we're always inspired by the latest thing--otherwise it's like, remember that thing that happened a week ago? Yeah, that was forever ago, and there's been another fifteen notable events since.


How have the Garages [community] reacted to the sound as a whole?  How have they been involved?  What's that relationship like?

rain: Really positive! I think the sound that happened was just like, the logical conclusion of what the Garages, the band of the Blaseball team, would sound like, to everyone.  There isn’t a prescribed way the band should sound.  It turns out everybody got a similar vibe.

But the reaction from the Seattle Garages supporters, and also the rest of the fandom as a whole, has really made it something that I've been like "Oh, I guess we should do something every week, people are really responding to this”, to the point that people join the Discord server and are like "Oh, I am supporting the Seattle Garages because someone showed me the bandcamp".


That must be an incredible feeling.

Can you talk me through the process of how you all get music up on the Bandcamp from just an idea?

Melissa: I feel our collective M.O. in terms of production is very DIY in a sense, where we encourage anyone who wants to put out a track to utilize what they have at home, whether that be professional [sic] equipment or just recording onto one’s phone and sending it out. It's all very lax and unrestricted, which I think may help folx feel comfortable in putting themselves out there musically, and also (in my opinion) adds to the charm of the Garages as a musical group.

rain: Yeah, absolutely, like, in the FAQ document, it specifically says "If it sounds bad, please submit".  You do not need to be good at any part of this process to contribute.  So for that reason, we have got a lot of people who've been like, “This is the first time i've written a song”, or recorded something, or whatever.   Then it turns out great anyways, and like MQ said, that's the charm.


Sounds very Blaseball.  Is there anyone(s) in particular you'd like to shout out as a major contributor, or do you think that it's more important to keep recognizing it as The Band?

Melissa: Well shoot, for me and probably a bunch of us (I shan't speak for everyone), rain has been doing an amazing job of facilitating the band, getting tracks on platforms and promoting them, organizing schedules for album themes and release dates, and pumping out a staggering amount of tracks themselves! However, I do think it's important to recognize The Band as a whole and the collective contributions  of everyone involved.

rain: Yeah, for sure, there wouldn't be entire albums produced every week if there wasn't a list of currently 15 contributors that were making it happen.

I'm gonna pivot here and ask y'all a personal question: has Blaseball been a big motivating factor in your creative life?  How much energy do you get from this community, this game?

Melissa: Blaseball and the community I've found therein are huge motivators and a wonderfully strange outlet for creativity! Personally I'm more on the backing musician end of things (drums are my primary instrument, so I'm very accustomed to sitting quietly in the back) versus writing lyrics and fully realized tunes, but out of all that the Blaseball community inspired me to pen some parody lyrics and put myself out there in that regard, and for all of that I am super thankful! I'm actively getting myself out of my comfort zone musically, which is making me way more confident in expanding and experimenting on a musical front. Blaseball alone provides a wealth of ideas and inspiration, and the community surrounding it is so open and supportive to all types of creativity.

rain: Yeah, it's been a really useful thing for both getting motivation, like topics and themes and whatnot, and also being motivated, by having to stick to a timeline and the response from everyone, which has, again, been incredible and mind-blowing. I think it's a special little thing that's ended up happening, and I don't know under what circumstances other than Blaseball that it would have happened in.

Okay, last question: who did you idolize going into the playoffs last week?

Melissa: I'm idolizing Francisca Sasquatch of the Unlimited Tacos, as is my duty in supporting the Snackrifice.

Melissa (she/her), known on the Blaseball Discord as MucusQueen, is an isolated music nerd currently contributing to the Garages. Find her on Twitter @QueenMucus.

rain (they/them) is a contributor to the Garages and manager of Fourth Strike Records. Find their bandcamp at rainrain, and on Twitter @ariskofrain.

Album art featured in this article was made by Deric Bindel. You can find them on Twitter @DericBindel. See more of their art on their portfolio website.

You can also check out our brand-new line of Seattle Garages merchandise, including two hat styles, a new shirt, and a limited-edition pre-order guitar pick set to rock out on your own kit at home--or maybe in a song on the next Garages EP.